Car 1002 was part of the first fleet of Light Rail Vehicles (LRVs) acquired by San Diego's Metropolitan Transit System (MTS) in 1980. As first delivered, the U2 cars from Siemens/Düwag (Duewag) in West Germany had no air conditioning and no interurban-style headlight. As the line grew in popularity, air conditioning units were added. The first line built was along the Right-Of-Way of an existing freight line that ran between Downtown San Diego (Centre City) and San Ysidro - right at the busy border crossing into Tijuana, Mexico. The cars ran on the streets in the Centre City and San Ysidro areas and on dedicated Right-Of-Way for the remainder of the line. As other lines were developed, new LRV's have been brought to San Diego but all maintained the original Red Trolley look of the original cars.

Beginnings of The San Diego Trolley

Streetcars were a way of life in San Diego in the early 1900's. Sadly, like so many large cities, San Diego retired the last of the streetcars April 24, 1949 to make way for the era of buses and cars. Starting in the 1960's regional planners started looking at options for moving people around the growing San Diego region. They realized that freeways were not the complete solution. In 1978, the region's Metropolitan Transit Development Board (MTDB) purchased the San Diego and Arizona Eastern (SD&AE) railroad from Southern Pacific thanks to Tropical Storm Kathleen damaging the Desert Line portion in 1976. This offered low-cost right-of-way for a future transit project at a bargain price. In 1980, San Diego Trolley, Inc. (SDTI) was formed.

The first 14 U2s came from Düsseldorf, West Germany and shipped into Long Beach with each half loaded on a forty foot trailer, hauled to San Diego and offloaded and assembled in the MTDB Trolley Yard in San Diego. The remainder of the U2s and all subsequent cars have been built at the Siemens plant in Sacramento, CA. July 19, 1981 marked the opening of the first new generation Light Rail system known at the time as the "South Line" (now the Blue Line) to the U.S. International Border at San Ysidro with stops in San Diego, Barrio Logan, National City, and Chula Vista. Once revenue service started, the Trolley and its fleet of 14 LRVs ran every 20 minutes along the primarily single-track line. 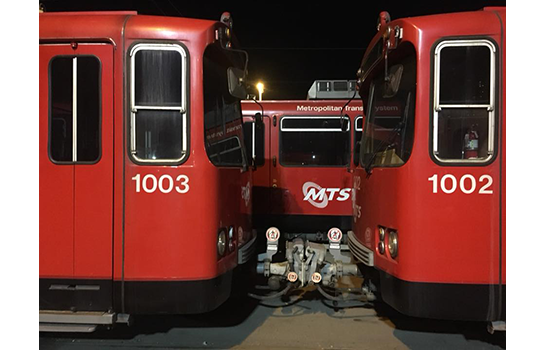 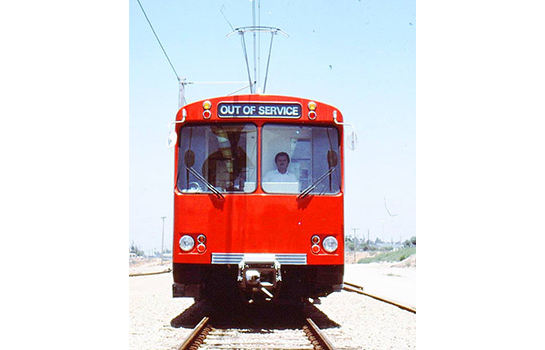 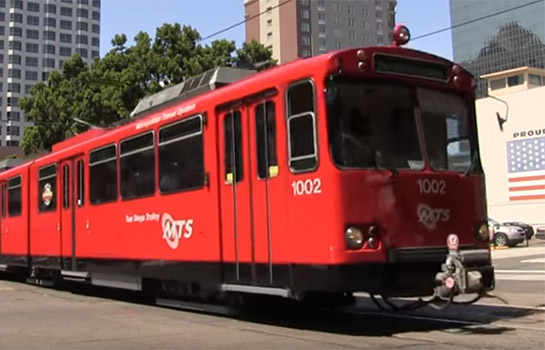 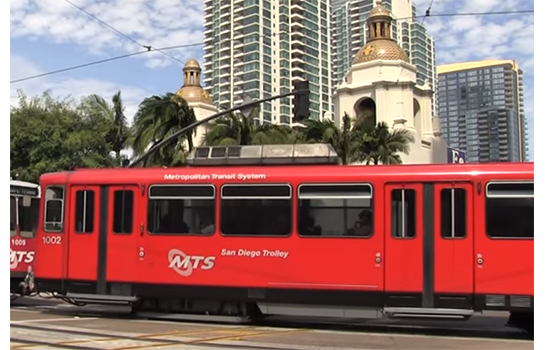 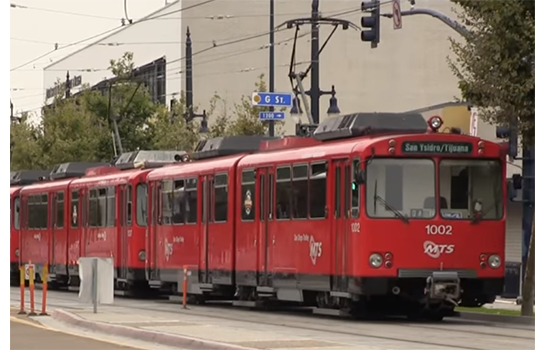 Car 1002 trailing at Park and G St in Downtown. (Photo from video by Mike Armstrong 5 ) 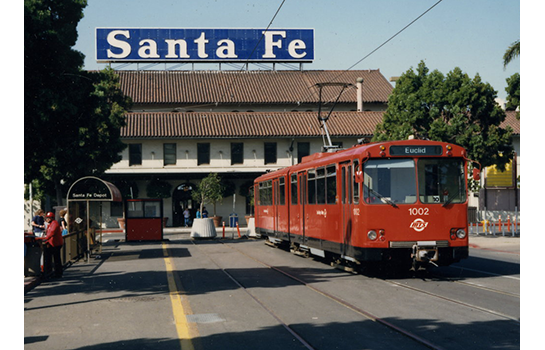 By February 1983 double-tracking was complete and 15-minute headways instituted. Ten new LRVs were also added to the fleet. Best of all, at 80 percent to 90 percent, the ratio of revenue to operating costs, also known as farebox returns, was well above the national average of 30 percent to 40 percent. In 1984, with the inital line growing quickly, MTDB broke ground on the East Line (later known as the Orange Line). U2 cars, like our 1002, continued to operate on the Orange Line but were not particularly useful on the new Mission Valley East extension where the grade along Interstate 8 was substantially steeper than any other location in the system. New low-floor cars were introduced in 2005 which required slightly higher platforms and it was clear that the older U2 models were on their way out of use. Officially, the U2s were retired January 26, 2015 even though several of the U2s were sold to Mendoza, Argentina in 2010.

As of mid-2018, eighteen of the SDT U2s were sold for a future operation in Knoxville, Tenn. They will be stored for about a year in the Miramar area and then will be sent through a shop for reconditioning and eventual operation in Knoxville! Eighteen U2s were sold to Mendoza, Argentina, about 20-25 were scrapped in the downtown San Diego Trolley yard. One (1002) is here at the National City Depot Museum. Two (1017 and 1018) are at the Western Railway Museum in Rio Vista, two (1003 and 1008) at Orange Empire Railway Museum in Perris, CA, two (1019 and ??) went to the Rockville Trolley Museum in Pennsylvania, near the East Broad Top RR. Two cars are going to Dallas, Texas to a Homeland Security training facility. One car will be going to a small brewery in San Diego, possibly the one near where these cars are being stored! It is interesting to note that 2/3 of the U2s were repurosed rather than scrapped.

What makes these cars so special is that they were the first effort in the United States to bring Light Rail similar to the old streetcar lines to a major metropolitan area. Senator James R. Mills (D-San Diego) was instrumental in bringing this vision to reality and it's success has been followed by many major cities across the nation. 2 According to the 2017 APTA Fact Book, San Diego MTS's Light Rail operation was the 4th largest in the nation as of 2015 1.

As other lines were developed, new LRV's have been brought to San Diego but all maintained the original Red Trolley look of the original cars. A fairly small operator's cab on both ends of each carset give the priority for space in the car to passengers. While each car could comfortably seat 64 patrons, there was room to stand as was frequently necessary. There was even room to stand on the pivot where the articulated train moved arounds the city street corners. This gave the car the ability to carry 96 passengers during rush hour and, if squeezed tightly as was done after Petco Park opened in 2004, these cars were able to jam in 150 sports fans!

The first deliveries of U2 cars were very much "no-frills". Heating and air conditioning was not included nor were the auxiliary ("railroad") lamp, door status indicators, or auxilliary marker lamps on the sides of the cars. These were retrofitted as they were needed in later years.

The San Diego Electric Railway Association welcomed the now-retired Car 1002 to the National City Depot museum March 30, 2018. MTS donated the second car that was delivered from Germany so that it would be preserved and available to our visitors. With the help of several generous donations to cover the costs, 1002 was rolled onto a long trailer and delivered overnight to the Depot yard. Video of this move can be found on YouTube here.

While it is not in running condition, we are able to operate some of the low-voltage systems. Our volunteers are working to develop a presentation that covers the history and impact of these hearty LRVs. We also offer a book for sale in our Gift Shop authored by Gena Holle - "The San Diego Trolley" that offers a detailed insight into the backgroud of the San Diego Trolley system and the iconic cars.

If you are interested in working with this beautiful piece of equipment or any of our other exhibits, please contact us at 619-474-4400 or at . 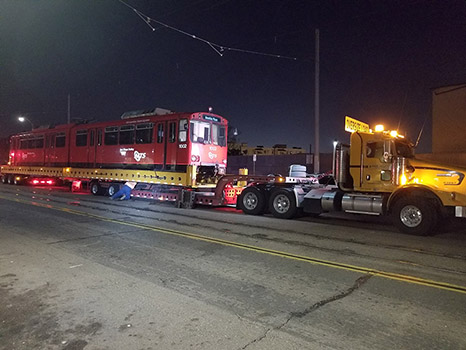 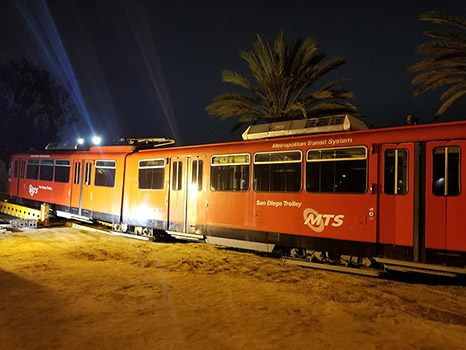 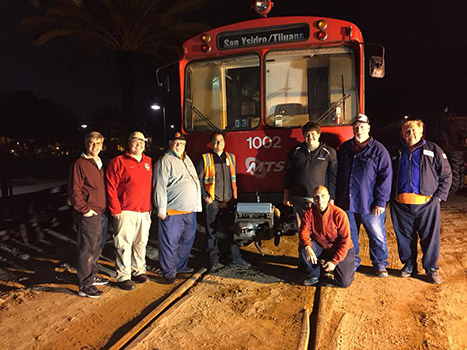